Ghosts of Presidents Past - A Reckoning 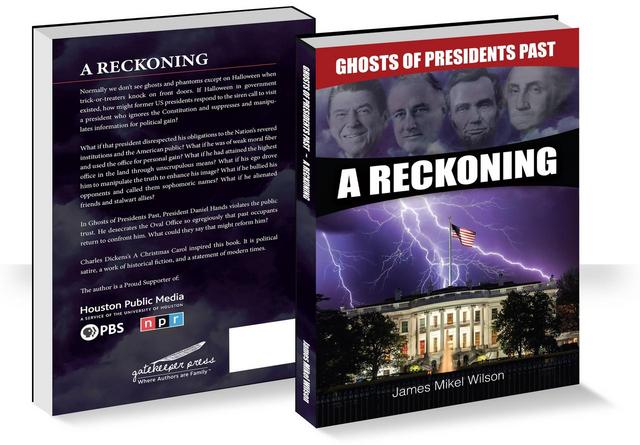 Ghosts of Presidents Past - A Reckoning

Houston, TX – October 16, 2020 – Ghosts of Presidents Past - A Reckoning by James Mikel Wilson offers a work of historical fiction and political satire in which a series of past presidents deliver haunting messages for Daniel Hands. The fictional President serves as a metaphor and inhabits a parallel universe in which he responds to similar, but not always identical, people and events as the real President.

In this parallel universe, nationalism, populism, isolationism, territorial aggression, intolerance, economic and social decay, trade barriers, walls, racism, anti-Semitism and hunger for power threaten once again to disrupt and destabilize nations abroad and at home. One after another, visiting ghosts confront POTUS and address these themes.

Harry Truman believed that ghosts of past presidents occupied the White House. So did Winston Churchill and Franklin and Eleanor Roosevelt. If one were to accept that the White House is inhabited by spirits, real or imagined, then no doubt some of them would be displeased about the disturbances President Hands creates. It seems imponderable that anyone in history could mess up his presidency as much as Daniel Hands. Or, perhaps one already has.

In Ghosts of Presidents Past - A Reckoning readers journey through time and space. Along the way, they may encounter some lesser known or forgotten facts about past presidents and come to realize these are not the best of times, nor the worst. Wilson captures many of the bizarre and controversial political events since 2015. The fictional outcome of Daniel Hands's reelection campaign builds to suspense and ends with surprises.

In a fresh and novel approach, Wilson takes his readers through iconic moments and events in presidential history. Here are a few:

·       The only president buried in the National Cathedral

·       A pivotal debate over slavery in Peoria between friends

·       Rogues in government who met justice

·       How the Temple of Virtue ended an attempt at monarchy

·       The first party ushered out the door after the 19th amendment

·       How bi-partisanship shaped the nation

·       How ignoring science killed a president

Wilson says, "The idea for writing this book came to me in a reflective moment when I asked myself how my parents, grandparents, in-laws and ancestors of various political persuasions might have reacted to a president like the current one."

James Mikel Wilson holds BA and MBA degrees. During a 43 year career at a multinational corporation, he traveled to 31 countries and 47 states. He has also resided overseas. Along the way, he took a keen interest in local governments, cultures, and international affairs. Wilson served with the 101st Airborne Division and is a Son of the American Revolution. He collects books written and signed by Presidents and First Ladies. Ghosts of Presidents Past - A Reckoning was modeled after Charles Dickens's A Christmas Carol. Both are statements of the times.

Wilson's previous work of historical fiction, Churchill and Roosevelt: The Big Sleepover at the White House won The 2018 Author Academy Award in Historical Fiction. A London playwright converted the work for the stage. The producers plan to premiere in England in 2021 and then in the United States. The author has written two other books. Paw Tracks Here and Abroad: A Dog's Tale and Mr. Froggy's Dilemma. He is a member of The Authors Guild.

Ghosts of Presidents Past - A Reckoning will be available via Amazon, Barnes and Noble, Apple Books, and other online retailers on or about October 16, 2020. 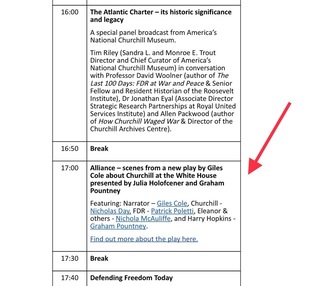 The 38th Annual International Churchill Conference in London October 2021 included live scenes from the new stage play Alliance, which is broadly based on my second book Churchill and Roosevelt: The Big Sleepover at the White House. The play is scheduled to premiere in England fall 2022. You can learn more about Alliance by copying and pasting this link: www.alliance-theplay.com  Honored for the applause.