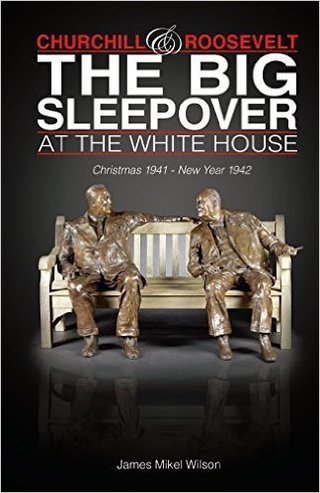 2018 Author Academy Award winner in historical fiction. During their time together, Churchill and Roosevelt shared many private moments as they forged a bond of friendship, trust, and cooperation that enabled them to map a wartime strategy to victory. How their relationship evolved is dramatized and personalized in this book, as well as the necessary compromises to press forward.

Most of the narrative is based on documentation, but what went on behind the view of the public eye is subject to the imagination. The author fleshes out the story by coloring it with conversations that may have occurred but that are not necessarily provable. Lastly, the writer sets out to humanize these two epic leaders of their time and perhaps the century. He reveals not only their fears and tears but also their joys, humor, passions, temperaments, and schemes. He attempts to peak into their minds as the two men join together intent on saving the Western World.

The Big Sleepover is a book for those who enjoy history and political intrigue but prefer the method of delivery entertain and inform. It is also written for those who enjoy reading about leadership and its applications, as well as lessons that are applicable today.

The author designed the book as a two-man monologue, with each character making comments and observations about the other. To cast a sense of urgency and drama, the story is told mostly in the present tense, with neither Churchill nor Roosevelt knowing the out come of the war. The two men had much in common, as the reader soon discovers, as well as plenty of surprises along the way.

Tod Gilpin, who has earned many honors and awards as an artist, designer, photographer, and webmaster, designed the front and back covers (www.togildesign.com).

Lawrence Holofcener, a master sculpture, created the Allies, a life size bronze sculpture of Churchill and Roosevelt commiserating on a bench, shown on the front cover (www.holofcener.com). Both sculptor and author share the same objective, to honor the two greatest leaders of their time. The original sculpture, a London landmark on Bond Street, is the most frequently photographed sculpture in England. It was a gift to the City of Westminster to mark 50 years of peace.

This book is a Proud Supporter of Fallen Warriors Memorial in Houston, TX (www.fallenwarriorstexas.org) and The National Churchill Museum in Fulton, MO (www.nationalchurchillmuseum.org).


Winner of the 2018 Author Academy Award in Historical Fiction. There were over 500 submissions for an Author Academy Award. Since its introduction, this work has 29 reviews posted on Amazon Books, almost all 5 Star. Here are three reviews, representative of what is being said about The Big Sleepover:

“I really like the idea of focusing on those three weeks at the White House and on the relationship between Roosevelt and Churchill as a lens for the greater history lesson. It reminds me a bit of what the movie Lincoln did by focusing on Congress’ vote to end slavery.” Monte Francis, San Francisco (author and four-time Emmy Award-winning journalist)

“The central theme of this book, the humanizing of these men as you place them in historical context, is incredibly moving. Also powerful, and what makes it stand out, is the way the conversations between the men range far and wide, giving context to so many connections I never knew existed.” Matthew Arkin, California and New York (author of In the Country of the Blind and American film, television, and theater actor and educator)

“This is a most unusual book — imaginative, innovative, and interesting. Its very title suggests that: Churchill & Roosevelt, the Big Sleepover at the White House, Christmas 1941 – New Year 1942. James Wilson’s short volume is not without flaw, but few first-time non-professional authors can take on a subject this vast without making a few mistakes. However, the author’s obvious vigor and enthusiasm are suitable compensation.” Dr. William Urban, author and distinguished Lee L. Morgan Professor of History and International Studies, Monmouth College. Quote is an excerpt from a book review of The Big Sleepover in the Monmouth Daily Atlas newspaper, December 31, 2016.

There is currently a professional playwright working on converting The Big Sleepover to an off Broadway stage play.