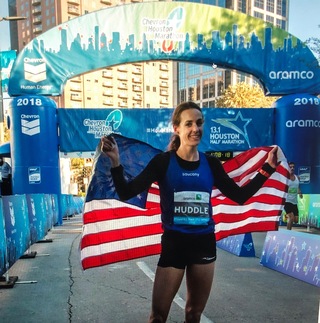 A patriotic 2018 Houston Marathon runner who honors those injured at the Boston Marathon.

An amazing and diverse international city with over 145 languages spoken, Houston just hosted the 2018 Chevron Marathon and Aramco Half Marathon. This year the races attracted 25,000 runners and about 250,000 spectators from around the world. In memory of their dedication and uncountable footsteps*, both in training and during the race, here are a few stories.

To the marathon organizers and planners’ credit, the course was pristine, despite Hurricane Harvey’s North American record breaking rainfall causing an estimated $50 billion damage to city property and infrastructure. Portions of the route had been flooded.

For a lot of reasons, Houston’s Marathon has demonstrated resilience, dating back to 1972 when it first attracted 113 runners and approximately 200 spectators. In1993 George W. Bush helped put it on the map when, at age 46, he ran the Houston Marathon in a respectable 3:44:52.

Elite runners from Ethiopia, like Biruktayit Degefu, typically collect most of the prize money. Again this year she won the women’s race. As a testament to Houston’s varied cultures, she first met her husband-to-be right after the 2015 Houston Marathon. He had immigrated to Houston from Ethiopia and admiringly watched her finish the race with a huge smile on her face. Attracted to her smile as others groaned in agony, he boldly introduced himself that evening at a post race banquet for the Ethiopian runners, hosted by the local ethnic community. This year, as her husband, he helped pace her to victory.

But there were some surprises this year. Molly Huddle from Rhode Island shattered the American record for a woman’s half marathon. And New Zealander Jake Roberston edged out the Ethiopians to win the men’s half marathon. For the last decade he has been living and training in Kenya with the runners he bested. To beat the odds, sometimes one has to go to extremes to win a victory!

Speaking of odds, I would like to tell you about another one of the runners. He is a recently retired dentist. We met for the first time on a Viking Cruise last year. While indulging in ample samples of local French table wine, we learned from Steve and his wife Alison that he might be running the Houston Marathon. Viking makes it so very easy to meet new people. They were an engaging couple and both sported an athletic gait on and off shore, with the rest of us trailing behind on various well-planned tours of Normandy and then later in England.

While staying in Oxford, and between visits to Highclere Castle (Downton Abbey site) and Blenheim Palace (Birthplace of Winston Churchill), Steve actually made time to run on the same track where Sir Roger Banister famously broke the four-minute mile on May 6, 1954. The Roger Bannister running track today is known as the Oxford University track. What a thrill for an avid amateur runner to repeat those footsteps!

In the spirit of the moment, my wife and I invited them to reach out to us if Steve really did plan to run the 2018 Houston Marathon. Last fall we got confirmation that the couple would be traveling to Houston in January.

The night before the race, we were fortunate enough to reunite with Steve and Alison at the original Carrabba’s Italian Grill Restaurant on Voss Road. Steve needed to load up on carbs to help fuel him through the 26 miles. His body would burn over 2600 calories covering the course. To my surprise, Steve only consumed a little over half of his delicious pasta. As an aside, it was a generous serving. Evidently his fine tuned body knew the limits to its storage capacity! He later confessed that he had already gorged himself, in a responsible way, the last two days prior to the big event.

So, how did Steve do in the race the next day? I’ll tell you in a moment since there are some even more interesting things to share.

First, we learned that Alison had also started running after she married Steve. She too had trained for a marathon, working her way up to run her first at the BMW Dallas Marathon after many months of hard training and sacrifice. Fate is not always kind to a runner. She came down with a severe bronchial infection just before the race. Steve pleaded with her to cancel. He assured her that there would be another marathon in her future when she felt better. Alison refused to knuckle under. With a fever, she told him I’ve worked to hard to get to this moment and “I WILL RUN THIS RACE.” Falling exhausted into Steve’s arms, Alison completed that race under the vigilant eyes and support of family and friends. Then and there, she announced that this would be both her first and last marathon! Alison says she is sticking to that proclamation, but proudly supports Steve in his pursuit of one after another.

So how many marathons has this trim, youngish senior runner completed? The Houston Marathon would be his 7th at this event. And the upcoming April Boston Marathon would be his 11th at that spectacle. As of this date, Steve has finished an incredible total of 63 marathons! Clearly standing eight hours a day over many years attending to his dental patients has not bowed his legs or impaired his will.

Divine Providence follows this couple. On 9/11 they were trapped in New York City. They lingered there for several days unable to get a flight home since all were cancelled and rental cars had vanished. Miraculously, a local, probably returning from an out of town business trip, managed to drive a rented vehicle back to his family in New York City. When the company announced that the car had just been returned, Steve and Alison said, “Don’t bother washing or vacuuming it, we’ll take it as is” and promptly left on a 1500 mile road trip home.

What are the odds? On April 15, 2013, Steve and Alison were in Boston. He had just finished the Boston Marathon when he, with her cheering him on, heard a loud noise sounding like a blown transformer. Sadly it was not. Had his time been any slower, Steve might have been a victim of an act of terrorism that killed three people and injured several hundred others…two bombs 12 seconds and 210 yards apart near the finish line.

Friends tell Steve and Alison that they are not so sure that they should travel with them. Alison just smiles. She knows they have been blessed. Oh, back to Steve. He finished the 2018 Houston Marathon in a very respectable time of 4:10 hours. A great time in temperatures locked in around 34 degrees for most of the duration of the course!

Speaking of temperatures, had the race been run a few days later, it would have exposed participants to a bone-chilling cold, windy day with temperatures hovering at 20 degrees and a wind chill factor of around 10. Houston hasn’t seen a winter day like this one in over twenty years. Friends should rethink travelling with Steve and Alison!

*Exercise physiologist Jack Daniels analyzed runners’ stride lengths at the 1984 Olympics. He found women averaged 58 inches and men 74. So women might take about 28,700 footsteps over the course of a marathon and men 22,400.